For the last series of bees in action I waited for a hot still day so that the bees activity would be at its greatest. By midday temperatures are hot and the bees are at their busiest. One thing bees don’t like is cold & windy days.

Knowing what environment you are going to be operating in helps as well, so that you can decide on the appropriate gear to use. In this case all that was required was the camera. The small pink flowers were in a patch of longer grass and I was able to literally sit with my legs outstretched around the flowers. The flowers you may have noted are about the same size as a large honeybee, small and very delicate. I lost a number of shots because the bees weight would tip the flower over and the bee would end up almost upside down.

I knew that my standard EXR settings weren’t going to be good enough for this shoot, as shutter speed really was going to be the key ingredient.

The camera was setup as follows:

Get as close as you can, within reason, as the bees don’t always like a camera lens shoved in their face. This discourages them and they tend to fly off leaving you nothing to shoot.

The bee images I shot were brought about by watching one particular subject at a time and tracking its movement and as much as possible anticipating its likely path. Once it was in a position I felt was right I would simply move the camera closer and use a little zoom to help fill the frame. This is a more difficult if the bees are working in a large bush or small tree as the ability to steady the camera becomes problematic. All the Bee images in the gallery were hand held shots as I generally never have time to setup up a tripod/monopod.

The 16:9 image size was deliberately chosen in this case as I wanted to have the fastest write times to the SD card that I could as burst mode shooting takes a while to finish writing to memory. The trade off here is that the file size is small for each frame at only 2.63 meg average. This may sound too small to really retain detail, but in fact is fine. You must however ensure that you get as much light as possible to the sensor.

To do this, there is two things to consider, ISO and Ev. Higher ISO’s mean faster shutter speeds but also introduce more noise. I settled on ISO 400 as the HS20’s output at ISO 400 is pretty good. I then deliberately cranked up the Ev to +1 or higher to make sure the exposure was mildly overexposed knowing that PP work would balance things out. There’s a small amount of highlight clipping on the pink petals of the flowers but the increased light gives better focus and exposures don’t lack because of the higher ISO and shutter-speeds.

Shoot using the LCD. You haven’t a hope in hell of getting shots like these unless you use the LCD. The only other way ( generally ) is from using a static setup with a tripod on a fixed point of focus. This is a successful but ultimately time consuming method. The HS20’s EVF simply isn’t good enough for this sort of work. The added advantage of a tiltable LCD is a very big bonus as well as I was able to maintain a seated position for a large percentage of the shots with the pink flowers.

Post processing is done in Photoscape and Neat Image. All cropping, levels, contrast, and any other adjustments are done in Photscape. Once I’m happy with the result I run neat Image to set the sharpness and noise reduction levels. Neat Image is an excellent companion for Photoscape too. I use the free version of Neat Image that only works with JPEGs, and that’s fine as I never shoot and process RAW images.

After the sharpen and noise reduction I then review the image in Photoscape and do a final level and contrast check and save the image. And Thats it, job done.

Below is the original image that the final crop was taken from and the final processed crops.

The images in the gallery are partly shot in this method and some are shot using the same techniques but in EXR HR mode as I wasn’t so much concerned with the bees flying as what they were doing and gaining detail and insight into their world.

You can see in the original image that the exposure is somewhat overexposed and there is clipping on the petals of the flower. The two cropped versions of this image show just how much headroom the Fuji JPEG’s actually have. The final output of the processed images is at least 2 stops lower than the original and very little highlight is lost. This  can be attributed to the excellent DR capabilities of the EXR sensor and Fuji’s EXR software & in camera processing. 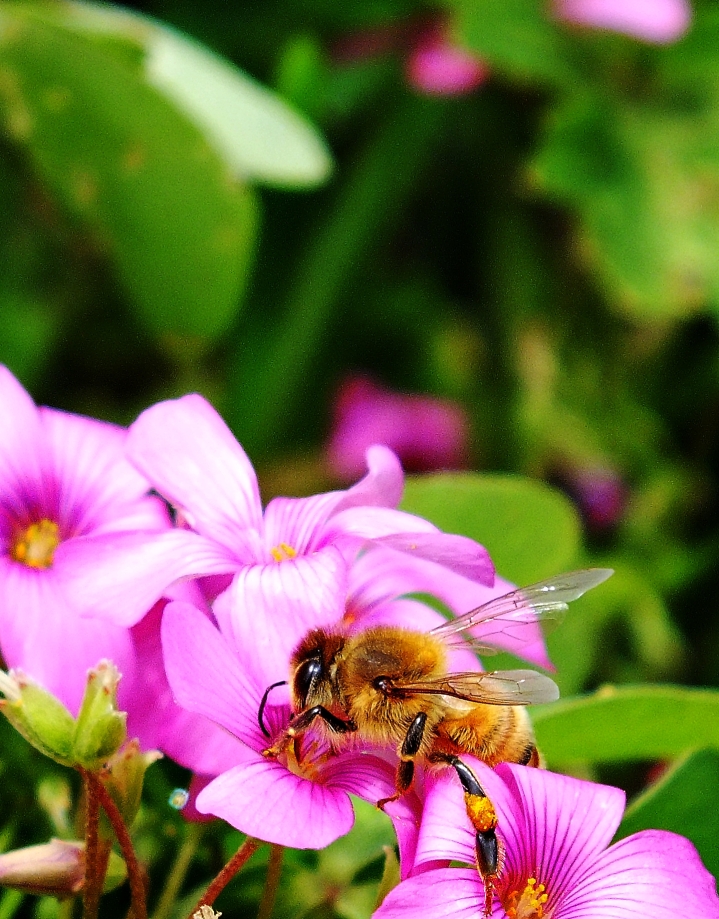