As a follow up to the previous article re:HS50 prices. In my searching for various deals and prices for the HS50, I also did some comparisons on older versus new models to see what bargains were to be had. I focused on the Pentax lineup as that is what I currently have at home.

As a replacement to my ageing Pentax SLR’s I have been looking at the Pentax K30 and K50. As a possible replacement I also looked at the K-01 as it may actually be a very good alternative as I wear, low profile graduated bi-focal glasses, a viewfinder is pretty much useless to me. So a good High quality LCD is a must.

Here is the results of my searches from two of the major online outlets for Camera Equipment. Both are regularly quoted as equipment sources in our top photo magazines as well. 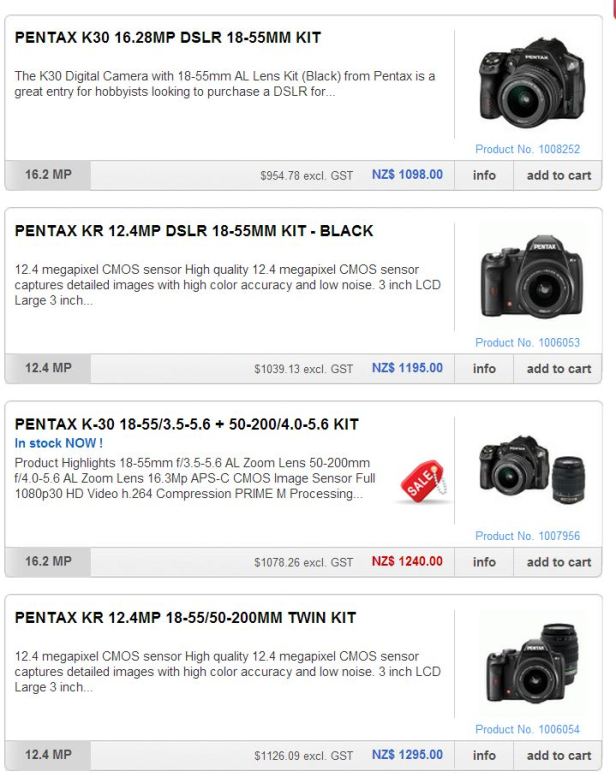 Its pretty easy to see the differences and to be fair the twin lens kit K30 is on sale, however how is it that older models, now a couple of generations out of date are more expensive than the new models?

It then got worse…. 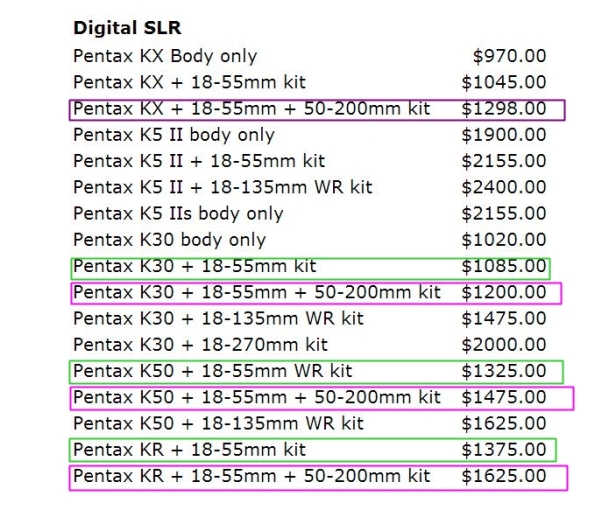 As you can see in this image the twin lens kits show the cheapest as the K30 kit. The Kr kit is a whooping $400 plus more expensive than a new camera that’s 3 years younger.

It doesn’t get any better in the single lens stakes either. Again the K-30 is the cheapest and the Kr the most expensive. Perhaps they are hoping that someone is going to be blind enough to miss the fact the a brand new, latest generation “weather sealed” camera isn’t a bargain in comparison to the older models.

If they are trying to recoup lost profitability from lack of sales on the older models, it’s more likely hell will freeze over first. Some time ago my local Dick Smith had a Fuji s100fs bridge camera in stock. At the time I looked at it this camera had been superseded by the HS10 and the HS20 and had been for sale for at least a year before the newer cameras had come to market. I happen to know this as at the time my son was working for this company. They had $1100.00 dollars on it, and I offered them $500.00 and forget the warranty, I would take it as is. I made this offer three times. In the end the camera was returned to Fuji distribution for disposal.

Frankly the actions of these retailers beggars belief. It has to be worth more in the long run to quit the stock, than to hold on to ageing equipment that no one is ever likely to buy. Do they really think we the consumers are that stupid?

From Paul C. Smith Photography ……………… a great new direction from our local photographer.

News, Lifestyle and Photography from the North East and beyond