Fellow blogger Kim Letkemen, over at Nothing Special, has been given an HS50 and S1 for Kim to review. This came about through on going debate at Dpreviews’  – FujiTalk Forums.

Reports have been coming in that are to say the least somewhat contradictory in nature as to the performance of both of these cameras.

Another forum member has both the HS20 and the HS50 and his preliminary tests are showing that crispness and resolution appear to be better in the HS20, while the HS50 has faster AF, write times and generally is faster all round performance wise as well as having the extra focal length and intelligent zoom. For me I’m most interested in which camera gives the best IQ, resolution and sharpness to the image with as little noise as possible.

I’ve seen both the HS50 and S1 images from experienced users and at the moment it would appear the the S1 may have an edge. Kim’s testing should allow us a better understanding of each cameras performance and their inherent weaknesses.

You can find part one of this review here and I will up date this regularly and add my own thoughts as we go along.

Be sure to check out the High ISO images at the end of Kim’s commentary. The results are quite revealing. I’ve always had doubts about the trade off Fuji made by going back to a front side illuminated sensor, when it came to detail and resolution performance and in this preliminary outing it seems that the S1 has come out on top and at ISO 6400 no less. I have to say that from a 1.2/3 sensor that’s pretty darn good.

Lets see how they stack up Physically

As you can see the HS50 is big, as big as some mid sized DSLRS so its not a discreet street shooter.

Here’s what they look like side by side thanks to Camerasize.com 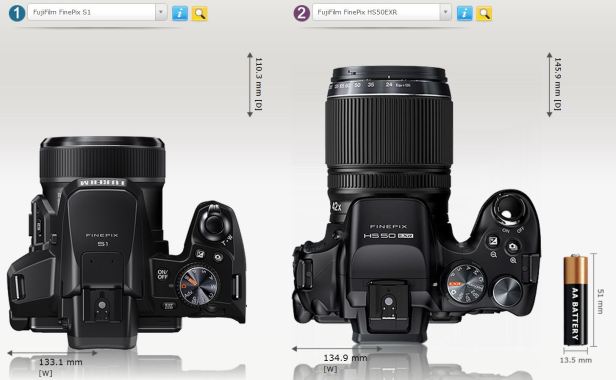 More to come on this shootout….